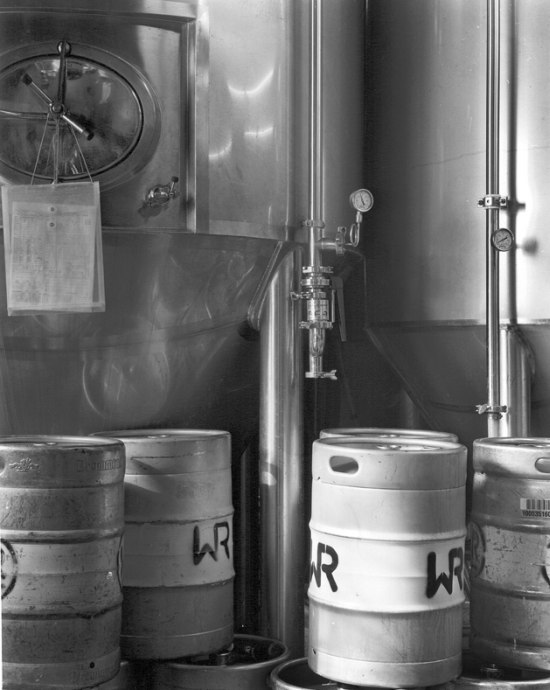 I spent a wonderful afternoon at the Wildrose Brewery a couple of years ago.  I had spotted this place about a year before while at a farmers’ market.  The brewery is housed in an old decommissioned Canadian Army base .  What was more than likely a storage building for machinery now housed these gleaming vats full of God’s special nectar.

I lugged my backpack full of large format lenses, loaded film packs and a Linhof Technica IV past the patrons in the front, through those special swinging doors that separated reality from a Willy Wonka-esk sudsy utopia.  The Wildrose Brewery is a relatively low tech facility. Since they are a micro brewery the output is small when compared to the big operators like Molsons or Labatts.  Here the staff are very hands on with every facet of production.  They actually care about the product they produce and it shows in the taste.  Years ago I had dealings with one of the chemists that work for a once large beer “manufacturer” here in Canada.  I asked him what was his favorite brand.  His answer surprised me, he said he didn’t drink beer, he knew what was in it.  Interesting to say the least.

Here at the Wildrose Brewery they coax out several very distinctive brews from their specially picked ingredients.  “Manufacturing” suds is so far from their reality you have to wonder how some of the swill produced by the big manufacturers can be called beer.   Wildrose beer has become popular here in Calgary due to its taste, not through juvenile commercials.

This particular shot wasn’t easy.  There was a door open on the left that was bathing the kegs in direct sunlight.  The vertical vats were in shade with the background almost dark.  The scene brightness ratio (SBR) was approaching 10 or 11.  Fortunately I use PyroCat-HD as my primary developer utilizing a semi-stand regime.  I adjusted my ASA (ya I’m an old fart and still call it ASA) to the appropriate value, placed my zones where I wanted them and let’r rip.  As it turns out the neg is fairly easy to print, only a little dodging and burning here and there.  The film I am using is Efke PL100  also known as ADOX 100.  I would really like to make a digital neg about 11×14 and use it to produce a carbon print as I have seen Sandy King do.  Carbon prints have such a 3D look to them.

Once finished my shooting for the day the Brewmaster took me around and we spent at least an hour sampling various beers straight out of the vats.  Before I left I did a crew portrait which was dropped off to them the following week.  One copy for each of them.

2 thoughts on “The Wildrose Brewery”